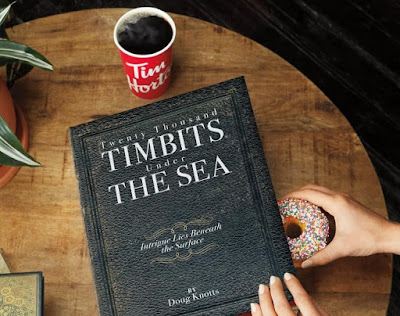 There are times that a limited time offer does more than drive sales.  Tim Hortons has been refocusing on consumer touchpoints that edify the brand to consumers.  The Tim Hortons Donut Disguise Box does just that according to Steven Johnson, Grocerant Guru® at Tacoma, WA based Foodservice Solutions®.

So, the Mother’s Day Donut Disguise Box is available on May 8 and May 9 with the purchase of a six-pack of donuts at $5.49 at U.S. locations in the Buffalo, Columbus, and Detroit metro areas, while supplies last. Success does leave clues and offering a six-pack of donuts is a perfect size to complement the average family.  The price point extends the price, value, service inflection point, consumers have been migrating to for the past 15 years according to Johnson.

Now that, Tim Hortons U.S. has introducing the Donut Disguise Box in honor of Mother's Day. The Donut Disguise Box looks like a book on the exterior but inside, reveals a six-pack of Mom’s favorite Tim Hortons donuts. The product is available in two book titles, Glazed Expectations and Twenty Thousand Timbits Under the Sea edifying choice while not slowing down service.

The Mother’s Day Donut Disguise Box is available on May 8 and May 9 with the purchase of a six-pack of donuts at the recommended price of $5.49 at four select Tim Hortons U.S. locations in the Buffalo, Columbus, and Detroit metro areas, while supplies last. Simply ask for the Donut Disguise Box at the counter or in the drive-thru at any of the four available locations.

Don’t forget that Tim Hortons marketing team understands interactive participatory marketing.  They are also bringing back the Mother’s Day DIY Donut Kit. This year’s kit features beautiful flower-shaped donuts that the whole family will enjoy decorating and eating. The DIY Donut Kit includes six bloom yeast donuts and four containers with fondant and sprinkles for decorating, at the recommended price of $6.99. Available from May 5 through May 9 at all Tim Hortons U.S. restaurants while supplies last, the DIY Donut Kit is a delicious gift and fun family activity all in one.