Why Grocerants Why now = CONSUMERS 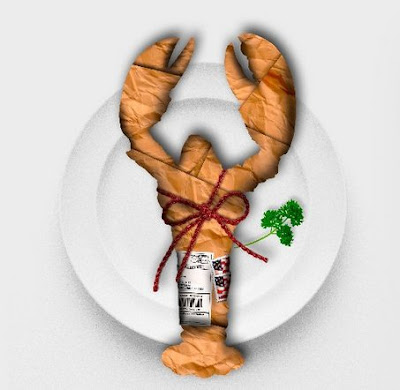 Restaurant quality goes upscale for the growing Grocerant niche as highlighted by: Leslie Kwoh of The Star Ledger. She has given permission for me to reprint this article she wrote! After a long week at work, Taryn Sardoni usually looks forward to changing into a dress, slipping on a pair of high heels and heading out to a swanky dinner with friends.
She recently forfeited her usual outing, however, in favor of another dining destination: The living room of her fifth-floor walk-up in Hoboken.
Looking for new ways to save money, but reluctant to pass up a nice meal, the 24-year-old and her roommate decided to order in a sumptuous Italian dinner for two, paired with a store-bought bottle of wine.
The total bill came to $50 -- less than she usually spends at a restaurant after factoring in tip, the cab ride and a couple glasses of wine. Still, after devouring the chicken in white wine sauce and ravioli stuffed with lobster and spinach, the pair concluded "it was just like going to a nice restaurant," said Sardoni, who interns at a Manhattan law firm.
Ordering in is no longer just about Chinese food or pizza. As the recession drags on, more consumers like Sardoni are getting full-course, finer meals delivered to their homes as a way of saving time and money, without sacrificing the indulgence, according to industry experts and executives.
"As opposed to ordering pizza, people are ordering chicken Cordon Bleu or steak," said Melanie Gordon-Felsman, vice president of communications for Delivery.com, a food delivery website that features more than 10,000 restaurants in 65 cities across the country.
In the New Jersey and New York regions, the average bill for orders rose to about $21 last month, from $18 in May and June, and $8 in March, she said, indicating that customers are ordering larger, more expensive meals. A review of individual orders revealed that customers were ordering more expensive entrees, and adding appetizers and desserts, she said.
"People are ordering a dinner experience now. They're not just ordering in food," Gordon-Felsman said.
The volume of orders has also risen 20 percent in the same period, and customers are ordering more frequently on weekdays, not just weekends, she said.
Gordon-Felsman attributed the trend to customers who are working longer hours and coming home too tired to cook, and families who want to dine out but would rather save on extra costs like baby-sitting or transportation.
More fine dining restaurants are also joining online delivery databases as a way of increasing their customer base, according to SeamlessWeb, a food delivery site that includes about 5,000 restaurants in more than 20 cities nationally, including Jersey City. The website has seen the average bill for orders rise in tandem with the addition of more high-end eateries, said Jason Finger, a company spokesman.
Overall, the restaurant sector has been hit hard by the recession. Nationally, June sales for food and drinking establishments dropped 2.3 percent from a year ago, according to Chicago-based research consultancy Technomic. While Garden State restaurants are not reporting fewer customers, many are lowering menu prices. They are also noticing the "slider effect," whereby diners are substituting appetizers and less expensive dishes for entrees, said Deborah Dowdell, president of the New Jersey Restaurant Association, which represents some 23,000 eating and drinking establishments across the state.
"They're spending less, and accomplishing that in many ways -- smaller portions, sharing dishes, ordering out," she said of diners.
The trend of ordering in pricier food is one of many ways consumers are cutting costs when dining out, she said. Restaurants, responding to that demand, are offering more menu options and sturdier take-out containers for delivery, she said. The trend is also helped by websites like Delivery.com, which enable customers to easily place orders with participating restaurants.
"The marketplace is clearly working," she said. "Customers are asking, and the restaurants are responding."
Since launching five years ago, Delivery.com has grown to include more than 250 New Jersey restaurants in eight towns including Jersey City, Hoboken, Newark, Trenton, Edison and Secaucus. Residents log on to the site, where they can peruse menus and send an electronic order to the restaurant.
One of the restaurants featured on the site is Amelia's Bistro, an upscale eatery in Jersey City where entrees run $16 to $24. Owner Frank Mandaro said business has declined significantly since September, the result of a drop-off in dine-in customers and corporate deliveries.
On average, the bill for each diner dropped $4 to $6. "It was painful," he said.
An increase in home deliveries, however, helped make up for some of the loss, he said. In recent months, dinner deliveries have increased 20 percent to about 60 per night, with customers ordering more expensive menu options. The average order-in bill has also increased to between $32 and $35, from $25 to $28, he said.
"They're more into the hard-core entrees," said Mandaro, 51, of the delivery orders. Mandaro estimated that by ordering in, the average diner saves $20 to $25 for the exact same meal because of the difference in tip and alcohol costs.
Sardoni, the law intern living in Hoboken, said she's been hooked ever since the successful Italian dinner for two. Aside from saving money, it offers another benefit: "We don't have to do the dishes," she said.

Ready to eat and ready to heat food is available from coast to coast from $2.00 to $100.00+. Yes my friends the Grocerant niche is booming!
Posted by Steven Johnson Grocerant Guru at 6:46 AM