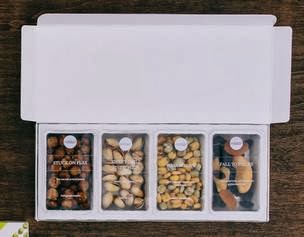 While most consumers head to the grocery store to stock up on snacks; General Mills is now going beyond frozen meals and experimenting with a subscription service that ships snacks boxes directly to consumers.

This new subscription service is called “Nibblr”.  The Nibblr subscription, “mails subscribers a regular snack shipment that cost about $6 each time. Snackers then rate what they tasted and future shipments are based off customer tastes. Yes, if this idea sound familiar think Netflix or Pandora and consumers are not adverse to signing up for food service either.

“Nibble” is contemporized consumer relevant innovation from this multi-national food retailer.  The “Nibblr snacks aren't General Mills-labeled and are mostly fruits, nuts and trail mixes. ..General Mills launched Nibblr through a business development unit the Golden Valley-based company calls 301 Inc. That unit, started last year, was envisioned by General Mills as a way to partner with emerging companies to develop food products. Nibblr has an immediate and established competitor in Graze.com, a U.K.-based company owned by Carlyle Group L.P.”

Will it work? The competitor “Graze told Bloomberg two weeks ago that it launched U.S. operations earlier this year and already has 55,000 customers and is adding 1,000 customers a day. It will begin a major marketing push in January.”

Success does leave clues new non-traditional points of food distribution are finding success daily.  Companies the ilk of General Mills find success operating at the “Innovation Intersection”.  That intersection is filled with a cross section of industry leaders, inventors, academics, entrepreneurs, customers and suppliers.  www.FoodserviceSolutions.us is at that same intersection are you?
Posted by Steven Johnson Grocerant Guru at 5:33 AM