Earth Fare ‘Better for you’ is Relevant Today 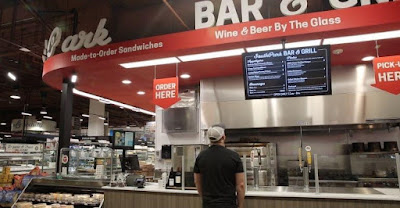 At the intersection of the consumer and food sales today in the ‘halo’ of better for you according to Steven Johnson, Grocerant Guru® at Tacoma, WA based Foodservice Solutions®. Johnson speaking about Earth Fare stated “they have a unique understanding that the ‘halo’ of better for you.  They understand that it extends into all aspects of the consumer touchpoints including technology, and digital menu boards are a large part of the consumer expectations and I (Johnson) has been telling the restaurant industry for years”.
Johnson continued saying if you want a sales lift while improving margins technology that is consumer facing, interactive, and participatory is a very good investment. The simple fact is that Earth Fare invested in digital signage which resulted sales lift.
So, earlier this year, Earth Fare piloted custom-designed digital displays from Mood Media in the café area of a store in Charlotte, N.C. Serving up a variety of information, marketing and entertainment content, the displays generated a 10% gain for the café’s eat-in food sales during a 60-day test.
Today, Earth Fare has Mood Media digital signage at 26 stores, including more than 180 screens and 400 media devices. Besides the café area, digital displays are located in such areas as the bakery, bar, seafood, deli, coffee/espresso, smoothie/juice, sushi, sandwich and pizza counters.
Mike Savage, senior vice president of merchandising at Earth Fare  stated “In addition to our commitment to provide clean and healthy food options for our shoppers, we are also dedicated to ensuring that our shoppers have enjoyable and memorable experiences…Mood Media helped us create a branded café environment that positively distinguishes us from other grocers. With new visual technologies and engaging, customized content, shoppers felt invited to eat, drink, lounge and relax.”
Here is how it started; for the pilot, launched in mid-2019, Earth Fare developed creative digital media content, which was displayed on five 55-inch, ultra-high-definition LCD screens, supplied and installed by Mood Media. Signage in the café included digital menu boards at the point of sale for food and beverages, Earth Fare branded content and targeted messaging promoting eat-in food options, live sportscasts (specifically for March Madness college basketball games) and local weather forecasts.

Mood Media noted that relevance was key to the digital content strategy for the pilot, given that Earth Fare customers tended to dwell longer in the café than other grocery departments. That my friends is how interactive participatory technology works elevating consumer touchpoints.
Authorized employees at Earth Fare manage the digital media content via Mood Media’s Mood Harmony platform. The tool’s interface lets them instantly change, edit and publish content for one or multiple screens across locations. They also can schedule content in advance, even down to the second, Mood Media said.
Bradlee Hicks, creative director at Earth Fare “With a clear layout and the ability to drag and drop, the CMS is straightforward and simple to use, and I know exactly where each of our hundreds of pieces of content will live, in this case the café area,” according to. “Within seconds, we can schedule content and push updates to several locations, a key factor for a retailer of our size.”
Earth Fare is also leveraging Mood Media’s partnership with DISH by occasionally airing live TV on screens in the Charlotte store’s café. Are you ready for a sales lift?
Looking for success clues of your own? Foodservice Solutions® specializes in outsourced food marketing and business development ideations. We can help you identify, quantify and qualify additional food retail segment opportunities, technology, or a new menu product segment.  Foodservice Solutions® of Tacoma WA is the global leader in the Grocerant niche visit Facebook.com/Steven Johnson, www.Linkedin.com/in/grocerant/  or www.twitter.com/grocerant

Posted by Steven Johnson Grocerant Guru at 12:26 AM