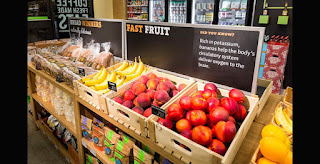 The world’s largest chain of convenience stores appears to be getting ready to say good-by to Roller Grill.  As regular readers of this blog have often lets us know it is time that 7-Eleven evolve past the roller grill and become more like Sheetz and Wawa. We have been saying By-By Roller Grill for a long time as well.

"We don't have everything made-to order yet, but that's the direction the market is going," Jim Brown, president of 7-Eleven Stores, told the news source.

The article continued “Three additional new-format stores are currently under construction in the Oklahoma City area, with plans for as many as 15 in the near future. The Oklahoman adds that some of the new stores will replace existing locations and others will be an expansion for the 7-Eleven Stores brand, which has about 110 stores in central Oklahoma. “…

Brown said that the new format is the product of a few years of planning and extensive market research. "It has been a process of finding out about what our customers like about us and building on that," he said. "The opening of the first store is only the beginning, not the end.”

Here in 2015 it is hard to believe but true these 7-Eleven Stores are one of the Oklahoma’s largest independent convenience and fuel retailers and employs more than 1,200 people. 7-Eleven Stores is a completely separate company from Dallas-based 7-Eleven Inc. While both companies share the name and trademark of 7-Eleven, only 7-Eleven Stores in Oklahoma continues to be family-owned.

So, when we ask is 7-Eleven Trading the Roller Grill for Grocerant Niche Fresh Food the answer is not yet but we hope that 7-Eleven is watching this test with the utmost care.

Interested in learning how Foodservice Solutions 5P’s of Food Marketing can edify your retail food brand while creating a platform for consumer convenient meal participation, differentiation and individualization? Email us at: Steve@FoodserviceSolutions.us or visit:  www.FoodserviceSolutions.us for more information.  Have you had Grocerant Scorecard conducted for you operation?
Posted by Steven Johnson Grocerant Guru at 12:21 AM