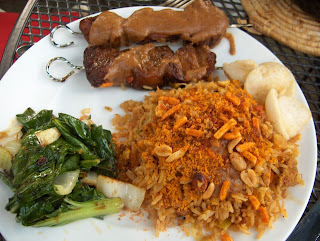 Legacy High-end restaurants have been trend setting or so they told us for years.  However new research from Culinary Visions edifies our position non-traditional locations are driving change.  Consumers driven in large part by The 65 Inch HDTV Syndrome are migrating food channels seeking new meal component options.

Street Markets of Asia are having an influence American food trends

-- Street markets rule. Say goodbye to the notion of fine-dining trends eventually trickling down to the rest of us. In 2013, it will increasingly be trickle-up. "All of the inspiration will come from street markets," …Much is coming from street markets of Asia, for example, which recently influenced Chipotle to open the Asian-themed ShopHouse chain. "It's a reverse thinking on the way companies look at identifying food trends," she says….

"Pure" food sells. Consumers want the food that they buy demystified. They want to be able to pronounce the names of all the product ingredients. And they want to know where it comes from — ideally, locally, says Olson. "Nothing sells like pure and simple," ….

Kids get coddled. Forget the crayons, toys and prizes. In 2013, the way to appeal to both parents and kids will be to offer healthier but affordable food options; pay attention to food allergies, and train staff to be extra kid-friendly,…
Pop-up eateries emerge. Chefs increasingly will take their cooking talents to oddball locations in 2013 from kiosks to empty storefronts to farmers' fields, predicts Olson. "Food trucks aren't news anymore," says Olson, "so these are new ways of delivering the dining experience."…

Canning gets cool. As the locally grown push grows, so will the notion of canning, curing and cutting in-house. Pickling, in particular, is emerging as a hip way to add a personal touch,…

Veggies rock. From hyper-local veggies to those imported from exotic foreign lands, the vegetable will move to the center of many plates in 2013. Fresh veggies will show up in more school lunches and in more gourmet retail shops, says Olson. "Veggies have become chic."

These may seem “odd-ball” locations to some of you but non-traditional locations are a driving force in the successful growth the grocerant niche. Here are some we have spoken about Fresh food Markets, C-stores, Produce Stands and even Liquor Stores are now selling fresh prepared ready-2-eat and heat-N-eat food.
Steven Johnson is Grocerant Guru at Tacoma, WA based Foodservice Solutions, with extensive experience as a multi-unit operator, consultant and brand/product positioning. Since 1991 Foodservice Solutions® of Tacoma, WA has been the global leader in the Grocerant niche for more on Steven A. Johnson and Foodservice Solutions® visit The Grocerant on LinkedIn or @Grocerant on Twitter
Posted by Steven Johnson Grocerant Guru at 4:58 AM