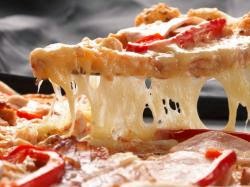 Success does leave clues and Noble Roman’s has found it in the Grocerant niche with Heat-N-Eat Take-N-Bake pizza.  Scott Mobley, President and Chief Executive Officer of Noble Roman's, Inc., stated " During the first quarter, we saw notable growth in the grocery store segment, validating efforts in this area during 2014, and 32% year-over-year growth in the stand-alone segment”.

Noble Roman’s has come to understand the how to thrive in an Omni-Channel retail word according to Foodservice Solutions® Grocerant Guru™. Ready-2-Eat and Heat-N-Eat fresh prepared food continues to drive top line sales and bottom line profits in every sector of retail foodservice today.

Mobley went on to say, “we are particularly excited about the rising uptick in the grocery segment as well as growth in the stand-alone segment, and we remain confident in all three target venues. We believe the company has created a highly diversified platform for sustainable and profitable growth into the future."
Let’s look at some of Noble Roman’s Success:
Searching for consumer relevance Noble Roman’s is not standing still  after introducing “new packaging for the company's grocery store take-n-bake deli pizza program consisting of bakeable, treated aluminum pans with a clear plastic top are proving to be a significant advantage.

They found relevance as consumers bake the pizzas in these pans that have an anodized treatment on the bottom designed to increase home baking performance, making the pizzas crispy on the bottom but soft and tender in the middle. The clear plastic top allows the entire pizza to be visible and appealing on the grocers' shelves. “Consumers are dynamic not static.  Restaurant brands must be dynamic as well.

Are you trapped doing what you have always done and doing it the same way?  Interested in learning how Foodservice Solutions 5P’s of Food Marketing can edify your retail food brand while creating a platform for consumer convenient meal participation, differentiation and individualization?  Email us at: Steve@FoodserviceSolutions.us or visit:  www.FoodserviceSolutions.us for more information
Posted by Steven Johnson Grocerant Guru at 3:15 AM