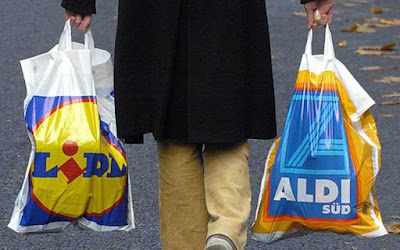 Aldi and Lidl are set to grow in the United States in 2016 and they will thrive in the US by next Christmas 2016. Foodservice Solutions® Grocerant Guru® often says “Success does leave clues”.  There is one clue no one in the United States grocery retail sector can overlook.  That clue is that next year both Aldi and Lidl will have stores open in the US and will drive down the cost of both traditional Thanksgiving and Christmas Meals and consumers adoption to both brans will increase.

So, where does the clue come from? Joanne Denney-Finch, chief executive of IGD (IGD is a grocery think tank).  Here is what they have found in Europe where both Aldi and Lidl are based and grounded in growing sales success and customer migration.

Customer migration is not driven by price alone but consumer adoption of food quality, speed of service, and smaller footprints.  “Beyond saving money, shoppers also cite the quality of products, the new products available and the opportunity to buy items unavailable anywhere else, as reasons for shopping in discount stores”, said Joanne Denney-Finch, chief executive of IGD.

The growth of Aldi and Lidl, which now together control 10pc of the UK food market, has meant that ‘Big Four’ supermarkets have been forced into slashing prices in order to compete and slow the exodus of shoppers to the discounters. While it will be some time before the US sees 10% of sales at the new discounters it will happen sooner than Albertsons and Kroger would like according to our own Grocerant Guru® expect both to trim prices and margins to maintain ‘share of stomach’.

Aldi and Lidl’s are not static price focused companies in fact both have recently improved the quality of their food and now sell more upmarket products and produce, including £4.99 whole lobsters and wine online, has been credited with luring more middle-class shoppers through their doors. Around half of British households now shop at one of the budget supermarkets proving the ability of Lidl and Aldi to garner customer migration.

Publix and Whole Foods can worry, but don’t be alarmed as “Supermarkets will remain by far the most popular destination but discounters, specialist stores (such as butcher and off licenses) and convenience stores are also favored by many. People are shopping around and spreading their spending across a growing number of formats.”  the study found.

Foodservice Solutions® team believes that 2016 will begin a five year “supermarket price war” in the United States according to our own Grocerant Guru®.  That coupled with 2016 food deflation that regular readers of this blog know we have documented and predicted will create a perfect storm for food retail price competition. Success does leave clues and restaurants, conveniences stores, and grocery stores will be in a fierce battle for share of stomach in 2016.  Are you prepared to break-out in 2016? 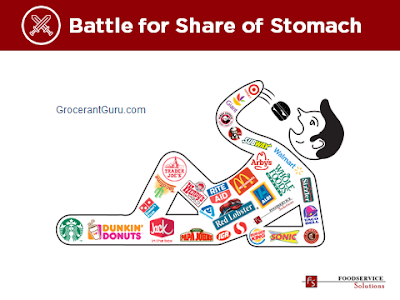 Posted by Steven Johnson Grocerant Guru at 1:21 AM