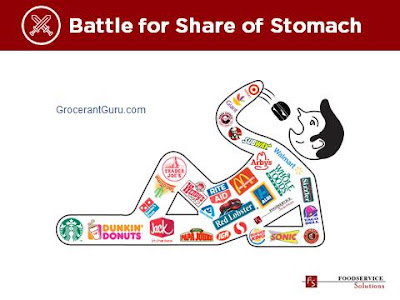 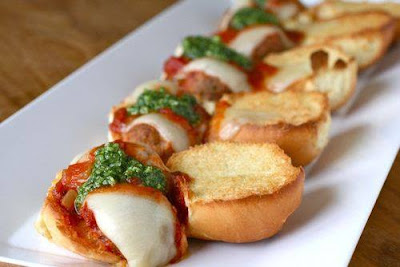 Imitation is the highest form of flattery and Steven Johnson the Grocerant Guru® at Tacoma, WA based Foodservice Solutions® told his team he was quite humbled when he learned that a large group of retail foodservice research groups and associations combined to use his studies as the foundation of ‘The Power of Foodservice 2018 – Part 2.  The focus, format, findings, and vernacular edified Johnson's work dating back as far as 1996.
Regular readers of this blog not only know that Johnson identified, quantified, qualified the Grocerant niche; that he coined the word Grocerant back in the day, and published articles in both Nation’s Restaurant News and Foodservice Director in 1996 in an article titled: Call them Grocerants.
This new report will have surprises for regular readers of this blog.  The report edifies Johnsons finding to the point of unmistaken nuance.  Let’s start by how they are framing the new report: “By 4 p.m., 65 percent of shoppers don’t know what they’re going to have for dinner, but they do know they want it to be fresh, healthy and convenient—an intersection that places retail foodservice in a prime growth position if it’s well executed.” Here are the top 10 findings from the report. A link to the full study is available below.
1. The number of home-prepared dinners is decreasing, and where retail foodservice should benefit, it is not.
The average number of home-prepared dinners dropped to 4.6 meals per week, showing declines across demographics. However, with retail foodservice visits flat and unit/eaches sales down, restaurants are the main beneficiary of these declines. Whereas young Millennials are the least likely to cook, the presence of children appears to be a turning point for Millennials to eat at home more often. Older Millennials over index for retail foodservice and present a big growth opportunity. 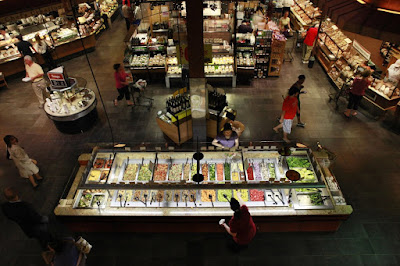 2. A staggering 65 percent of Americans don’t know what’s for dinner at 4 p.m., and retail foodservice is not top of mind.
Only 35 percent of Americans usually know what’s for dinner two hours before mealtime, but only 15 percent frequently consider retail foodservice when unsure. The less likely shoppers are to have set dinner plans, the lower their per capita grocery spending. Standard featured days, a weekly meal plan, chef specials and online planning/shopping tools may drive awareness and sales.
3. Seven in 10 shoppers emphasize healthy, nutritious choices when ordering from retail foodservice or restaurants.
Healthful eating strategies differ by population group, but switching to better-for-you alternatives is the most frequently employed tactic of health-focused shoppers and foodservice regulars. While 68 percent of shoppers believe sufficient information to make educated decisions is available in general, many would appreciate additional tools in the deli/prepared foods department, led by healthier ingredients (85 percent), clean label items (83 percent) and in-store health and nutrition information/education (71 percent). 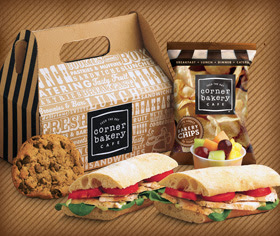 4. More shoppers are taking action on calorie callouts at restaurants. They are influencing retail foodservice selections equally.
While awareness of calorie labeling in restaurants is relatively unchanged, more of the shoppers who have taken notice are changing their selections—up 8 percentage points. Awareness of menu labeling at retail is lower than restaurants, at 54 percent vs. 77 percent. However, among shoppers who notice, an equal share adapts their selections. Most shoppers prefer to receive calorie and other nutrition information by the item or spoon, at 67 percent. An ounce-based system is the least popular.
5. Shoppers want it all: the ultimate deli/prepared foods department has grab-and-go and made-to-order.
Made-to-order offerings guaranteeing freshness and customization is the only way to go, according to 32 percent of shoppers, but 64 percent believe the ideal deli department carries both grab-and-go and made-to order items. Retail foodservice has a big opportunity to position either solution type as a meal ingredient in addition to a meal replacement as 53 percent of shoppers combine scratch-cooking with semi- and fully-prepared items.
6. Shoppers’ top ways of learning about a grocery store’s retail foodservice offering are in-store, but key targets shop less often.
In-store signage and personal observation/experience are the prime ways in which shoppers learn about a store’s foodservice offering. Both require in-store presence and far exceed the reach of out-of-store vehicles such as websites, apps or social media. This is the underlying reason for prime target consumers who cook less, but also shop less, to bypass retail foodservice. These consumers need other in- and out-of-store triggers to drive purchases, with awareness and variety being two major drivers.
7. Adding to its grocery adjacency advantage, retailers should emphasize the quality, freshness and healthfulness of the food itself.
Shoppers point to saving time over cooking, planning and cleaning, and having an immediate meal on the table as the four chief advantages of retail foodservice over home cooking. The ability to combine picking up tonight’s dinner with grocery shopping is seen as the greatest advantage over restaurant/fast food, followed by speedier ordering/pick up and offering better value for the money. Foodservice regulars see many more advantages and, in particular, highlight the superiority of the food itself. 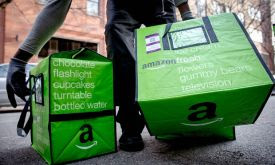 8. Technology usage in dinner planning and other food/grocery applications is ramping up across demographics.
Shoppers of all ages, income levels and regions are increasingly using mobile, online, tablet and voice searches when deciding where and what to eat. More than half use digital/mobile technology to find recipes, check sales promotions, research dinner options, create grocery lists and order restaurant meals. Foodservice regulars are above-average technology users.
9. Retail foodservice price promotions are not greatly effective in generating sales but can drive awareness and meal planning.
Only 21 percent of shoppers regularly check retail foodservice promotions and a majority prefer favorable everyday low prices. IRI finds that only 14 percent of total deli/prepared foods vs. 34 percent of the total perimeter dollars are sold on merchandising. When promoted, retail foodservice sees a mere 4 percent increase in dollars, with little incrementality. 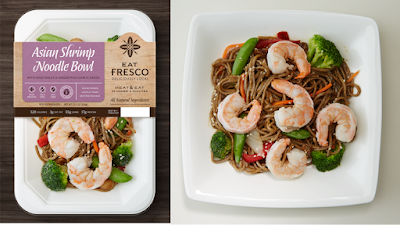 10. Shoppers have no strong preference for an in-store versus a central kitchen, but brands can provide a premium edge.
In-store production is not an automatic plus as the largest share of shoppers (44 percent) believe there is no difference in items prepared in a central kitchen or made in-store. Remaining respondents are fairly equally divided between in-store production being better (27 percent) versus a central kitchen being better (22 percent). Opinions are split on brand preferences as well: 36 percent like having familiar brands for items such as meat, deli meat and salad dressings in retail foodservice, but 43 percent are indifferent.
Success does leave clues our clue for today is don’t settle for imitators.  For international corporate presentations, educational forums, or keynotes contact: Steve@FoodserviceSolutions.us  the Grocerant Guru® at Tacoma, WA based Foodservice Solutions®.  His extensive experience as a multi-unit restaurant operator, consultant, brand / product positioning expert and public speaking will leave success clues for all. Visit: www.FoodserviceSolutions.us for more information 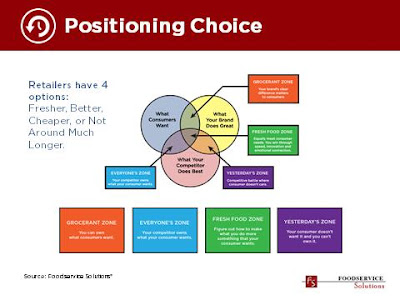 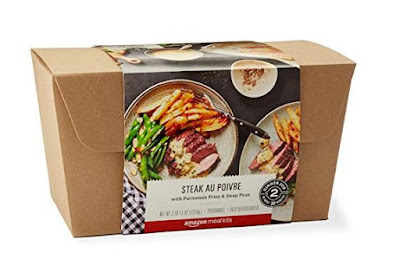 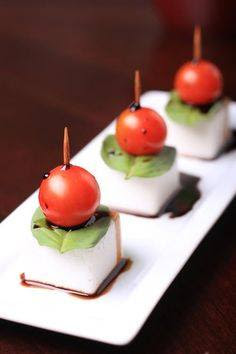