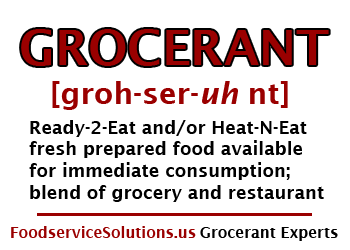 Foodservice Solutions® team has found “94% of traditional grocers are remodeling their stores to give more space for fresh, prepared foods; the figure was 77% in 2010.”  Johnson continued "Fresh, dine-in food has higher margins than the center-store products, acts as a differentiator from other stores and is more interactive with customers, generating loyalty,"

The NPD Group recently reported that “the number of people "eating dinner at grocery stores" is up seven percent over five years” The same report found "the number of meals served at convenience stores in the 12 months ended August 2014 grew 3.1 percent from the prior year." All the while restaurants saw a 0.4 percent decline during the same period.

It’s not just C-stores that are garnering restaurant customers, food service revenues at Whole Foods ($2.7 billion) is not far behind Chipotle’s ($3.1 billion).  The Wall Street Journal reported that the “Hottest New Restaurant Might be in Grocery Store”  stating “This may or may not be cause for concern at Chipotle, but such trends mean something to Mike Andres, US president of McDonald’s, who now sees convenience stores as a top competitor.”…

"It’s pretty good for gas-station food," says William Franklin, who sometimes grabs a burger at Sheetz, "a chain of 487 convenience stores and gas stations" that has also "rolled out barista stations that offer fruit smoothies and coffee drinks, as well as full-service kitchens that can make items like mozzarella sticks and burritos and provide in-store seating." It must be noted that Sheetz is now describing itself as a restaurant that service gas rather than a C-store that sells food.

The WSJ article went on “The profitability of such offerings compare favorably to traditional c-store staples, "with margins of up to 40 percent compared with about 5 percent for gas." "People don’t smoke as much as they used to or use as much gas as they used to," says Sheetz CEO Joe Sheetz.

It’s a similar story at Whole Foods, which five years ago "had no full-service restaurants and fewer than a dozen venues where people could sit, eat and have a beer or glass of wine. Now it has more than 100 stores with such venues." "We used to think of food service as the smaller part of the business … We are turning it on its end," says Paul White of Whole Foods.

Success does leave clues and when well-funded, well-run retailers are finding success selling Ready-2-Eat and Heat-N-Eat fresh prepared food other are sure to venture in.  The Grocerant niche as Foodservice Solutions® team refers to his sector is building momentum and 2015 just might be a breakout year.