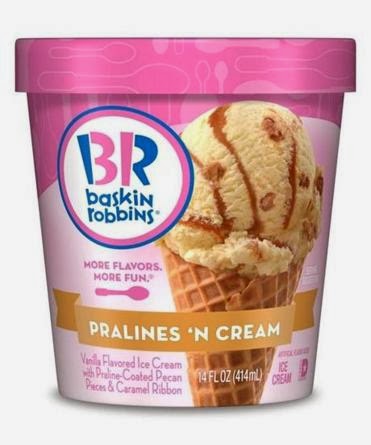 The seemingly coldest winter anyone can imagine has a bright spot.  Baskin-Robbins world famous ice cream is coming to the frozen food court in your local grocery stores.  Yes, the frozen food court where California Pizza Kitchen sells Pizza, Boston Market sells complete meals and TGI Fridays is selling appetizers now Baskin-Robbins ice cream will provide desert.
Baskin-Robbins is driving awareness to it successful retail stores best known for offering 31 flavors by introducing its first full line of cold treats for grocery stores. Can’t wait here is what you will find:
“Three-packs of jamoca almond fudge and mint chocolate chip ice cream bars and 14-ounce cups of ice cream in flavors such as gold medal ribbon and pralines ‘n cream are rolling out in supermarkets in California and should reach Boston’s Shaw's stores in the next few weeks.”
Baskin-Robbins was founded California in 1953 and has a strong presence on the West Coast, and currently operates 455 stores. With over 2,465 Baskin-Robbins stores in the United States and more than 4,600 in other countries entering the frozen food court will drive brand awareness and extend consumers contemporized relevance.
“Ice cream is a category used by all age groups and all demographic groups,” said John Fassak, vice president of business development of Dunkin’ Brands Group Inc., the parent company of Baskin-Robbins. “Our goal is to have these products available across the country and build more of an affinity for the brand.”
Consumers are not static they are dynamic brands must be as well.  A new entity was form by Dunkin Brands called Boardwalk Frozen Treats  it was “established as a separate entity to market, distribute, and sell Baskin-Robbins products for grocery stores through an exclusive license agreement. The company is led by Tom Delaplane, a former Dreyer’s Grand Ice Cream executive.” Success does leave clues and Dunkin is on the right aisle.


Visit: www.FoodserviceSolutions.us  if you are interested in learning how Foodservice Solutions 5P’s of Food Marketing can edify your retail food brand while creating a platform for consumer convenient meal participation, differentiation and individualization  or learn more at Facebook.com/Steven Johnson, Linkedin.com/in/grocerant or twitter.com/grocerant
Posted by Steven Johnson Grocerant Guru at 5:17 AM