Did the Golden ear of the restaurant industry fad? The customer moved first! 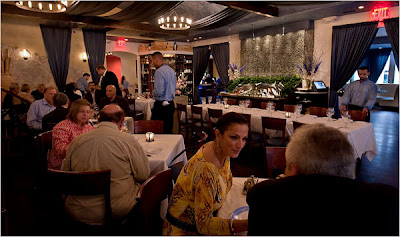 This week in New York at RBC Capital Markets Consumer Conference leading restaurant executives were “bullish” that consumer changed purchasing food behavior would at some time end. That was there hope and slant to professional investors. The facts that they were expressing included the realization that consumers are eating out at restaurants less frequently, when they do dine out they order less expensive entrée’s and fewer alcoholic beverages. They talked of the good old days 2006 and 2007.
Here is what concerns me! 2005 was the first year in 25 that consumers shifted spending patterns on food and actually increased the percent spent on Grocery. During the previous 25 years there had be an increase per household on monies spent at restaurants each and every year. In fact in 2004 was the first year that the share of stomach in dollars spent tilted toward restaurants . Starting then in 2005 the 25 year trend has reversed and the dollars spent is now in favor of the Grocery sector firmly.
The economy did not start to fail until late 2007 and we all know what happened in 2008! Restaurateurs must acknowledge that they are part of the overall food industry and lacking innovation, promoting copy cat menu’s and dwindling service is not the way to grow a niche. Convenience stores new fresh prepared food offering and Supermarket quality, affordable prepared ready-to-eat and ready-to-heat Grocerant style food is drawing consumers, providing choice, portion options and flavor profiles bundled for families from 1 to 20! Maybe there is a storm cloud over the restaurant industry, the customers moved first prior to the economic environment we find ourselves in today. The customers have found some sunshine in the Grocerant sector. http://www.anything4restaurants.com/blog/index.php/2009/07/restaurant-consumer-discontinuity-the-consumer-moved-first/
Posted by Steven Johnson Grocerant Guru at 4:18 AM