Amazon is Getting Closer to Your Food Customers 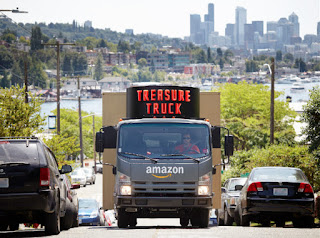 Last week Amazon announced it was rolling out a new program to drive incremental discovery, reward customers, while getting closer to its customers.  The program is called Treasure Truck.  It is only available on the Amazon App on your smart phone.

Treasure Truck is a deals program that Amazon is launching soon to allow customer to buy a heavily discounted through the Amazon’s mobile app and then pick up the item directly from that truck at an announced designated location in and about Seattle as a test program.

The first launch item has been announced as well it is a great deal a $99 inflatable stand-up paddleboard set that normally sells for more than $475.  The designated pickup location was near Amazon’s headquarters and the Museum of History & Industry in Seattle. The company had even suggested that people buying the paddleboards could try them out right away on nearby Lake Union.

Fresh Food is on the agenda as well.  Are you Ready-2-Eat or looking for Heat-N-Eat fresh food?  You just might start thinking more and more about Amazon’s Treasure Truck.   Amazon’s says “Remember your neighborhood ice cream truck? It was a four-wheeled joy machine that excited you every time you heard it roll through the streets. Why should this excitement end just because you’re all grown up? Good news—it doesn’t have to.”

When the Treasure Truck pulls up in your neighborhood the next time it just might have Prime Ribeye Steaks, Copper River Salmon, or even Ice Cream! The Treasure Truck is full of incremental surprise, delight, and discovery.  In other words everything you expect from Amazon. Follow Amazon’s Treasure Truck on Twitter.com @treasuretruck. 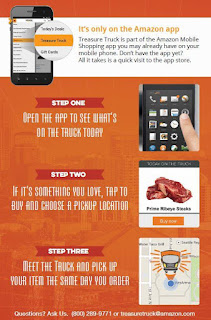 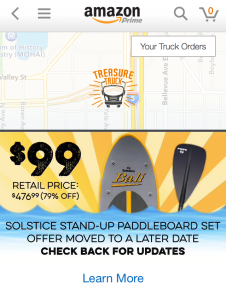 Posted by Steven Johnson Grocerant Guru at 4:47 AM