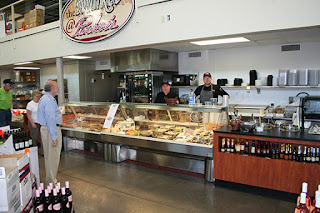 Americans love their Grocerant.  Ready-2-Eat and Heat-N-Eat fresh prepared food back in the day was seen a treat that replaced the home cooked meal.  Today grocerant niche fresh prepared food has become a staple, a lifestyle, a pantry replacement, and much more according to Foodservice Solutions® Grocerant Guru®.

In a “new study from the real-estate site Zillow, homes tend to appreciate in value when there is a local Trader Joe’s or Whole Foods nearby. This finding comes from a wide-ranging examination of city-level data on nearly 3 million homes (single-family, condos, and co-ops spanning more than 80 locations nationwide) within a mile of a Trader Joe’s or Whole Foods. From 1997 to 2014, the value of these homes exceeded that of the median home in the U.S., according to Zillow’s calculations. And by the end of 2014, these homes were worth more than double the year’s median home value.”

The Zillow study found, “neighborhoods with an impending Trader Joe’s location nearby appreciated at the same rate as other homes in the city before the store’s opening. Two years after the Trader Joe’s opened, however, the median home values in the area appreciated by 10 percentage points more than the rest of the city”  Trader Joe’s is filled with grocerant niche Ready-2-Eat and Heat-N-Eat food as regular readers of this blog know.

The Zillow study suggests that, if gentrification were occurring before the arrival of a gourmet grocery store, these stores act as a catalyst for rising home values and neighborhood “upgrading.” Which we all agree is a good thing. The growth of the grocerant niche was never a fad, it is an expanding trend that continues to drive change while evolving the face of food retail and much, much more.

Here is what is important about this study according to our Grocerant Guru® “consumers do not want to cook, do dishes or clean up on a daily basis.”   There is a lot of talk about neighborhood gentrification today that however should not be the focus.  The fact is 50% of Americans over the age of 18 are single according to the US Census data and single people do not want to cook every meal from scratch.

Visit: http://www.foodservicesolutions.us/ for more from the Grocerant Guru® who continually reminds us, that the consumer is dynamic not static.  Have you had a Grocerant Scorecard conducted on your business?  Ready-2-Eat and Heat-N-Eat food sells.

Are you ready to create a platform for consumer convenient meal participation, differentiation and individualization attracting Grocerant niche consumers?  Contact: Steve@FoodserviceSolutions.us for more join us on LinkedIn at: www.LinkedIn.com/In/Grocerant 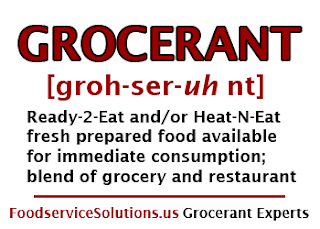 Posted by Steven Johnson Grocerant Guru at 4:48 AM